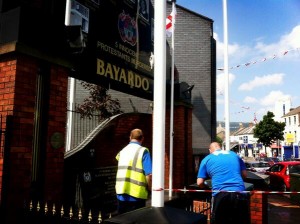 POLICE are investigating after a memorial to murder victims of an IRA pub bombing was attacked with paint over night.

A clean up operation is underway at the Bayardo Memorial on the Shankill Road in west Belfast on Thursday.

Anyone with information about the attack is asked to contact police at Tennent Street PSNI station on 0845 600 8000.

IRA terrorists led by Brendan ‘Bik’ McFarlane launched a bombing and shooting attack on the pub on Aberdeen Street.

Four Protestant civilians and one UVF member were killed.

The attack was believed to have been retaliation for the Miami Showband massacre two weeks earlier when he popular Dublin-based band were ambushed by the UVF at a bogus military checkpoint.

Three band members were shot dead by the UVF gunmen after their minibus was blown up in a premature explosion.

McFarlane and two other IRA volunteers, Peter “Skeet” Hamilton and Seamus Clarke, were sentenced to life imprisonment for carrying out the Bayardo attack.