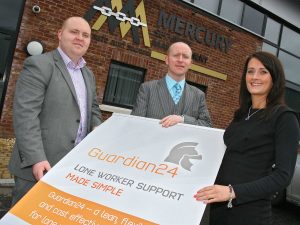 TWO Northern Ireland companies have joined forces to address the growing issue of lone worker safety and the potential impact it could have on businesses under Corporate Manslaughter legislation.

Guardian24, a leading provider of lone and mobile worker safety solutions, and Mercury Security Management, Northern Ireland’s biggest independent security company, have teamed up to offer much needed protection to vulnerable lone workers throughout Ireland and beyond.

According to The Office of National Statistics 2009 there are approximately 2.5 to 3.5 million lone workers currently employed in the UK – a long list that would include postal staff, social workers, doctors, district nurses, pest control workers, drivers, engineers, architects, estate agents, sales representatives and similar professionals visiting domestic and commercial premises. Even office staff working alone late at night can be vulnerable to potential theft or attack.

The solution on offer from Guardian24 and Mercury Security allows lone workers to use their mobile phone to log their whereabouts at any particular time and the expected duration of their stay, or track their movements via GPS. Their mobile device also doubles up as a covert panic button which can be activated discreetly if the lone worker’s safety is compromised.

The service – which can be used via mobile phone, BlackBerry, Android, iPhone, Windows PDA or any specialist lone worker device – is also of great interest to local businesses and employers who have a duty to protect their staff or face very severe consequences in the event of an employee being harmed whilst carrying out their job.

Under the Corporate Manslaughter and Corporate Homicide Act of April 2008, companies can be prosecuted for the offence of corporate manslaughter if the way its activities are managed or organised causes a death and this constitutes a gross breach of a duty of care to the deceased.

In addition, owners and senior managers of businesses can be personally prosecuted for offences related to failures in health and safety management, including gross negligence and manslaughter. Indeed, it is likely that a prosecution will be brought for corporate manslaughter against a company in tandem with prosecutions against individual directors or senior management for personal liability.

“Guardian24 already safeguards over 33,000 people across 400 organisations in the UK and Ireland through our mobile-application for lone workers,” said Guardian24’s Chief Executive Henry Woods.

“Now, as a result of our partnership with Mercury Security Management, companies from Northern Ireland and the Republic of Ireland will benefit from having a robust and fully accredited Alarm Receiving Centre response provided by the Mercury team.

“Both Guardian24 and Mercury Security are fully committed to helping safeguard these individuals that work alone in vulnerable circumstances, which is why we believe that our partnership will be a great success,” he added.

Mercury Security Regional Director UK and Ireland Liam Cullen said: “We believe that this combined solution will provide the highest level of protection for lone workers whilst also protecting employers from potential legal action which could be extremely damaging to their business.

“The system allows customers to take advantage of the trend towards BYOD (bring your own device) among employees, freeing employers from the financial and time considerations inherent in device evaluation and procurement processes.

“Users now have a lone worker solution on the device they are comfortable and familiar with, and which they already carry at all times, safe in the knowledge that our Alarm Receiving Centre is on hand and ready to kick into action should the need arise,” concluded Liam.

Ø The lone worker logs his or her whereabouts via their smart phone or mobile device leaving details of their location and the expected duration.

Ø If their activity over-runs, Guardian24 will automatically call the worker to verify their safety.

Ø If the user cannot be reached, a nominated respondent or Mercury’s Alarm Receiving Centre (ARC) will be notified so that an agreed protocol can be put in action to verify the user’s safety and location.

Ø Should the lone worker’s safety be compromised, they can discreetly press a dedicated key on their chosen device to summon emergency assistance – even if the keypad is locked.

Ø At this stage Guardian24 will record live audio and immediately notify a nominated respondent or the Mercury ARC.

Ø Guardian24 provides the user’s personal details, activity details and live audio to the

Ø The respondent may then call the incident helpline and connect to a live feed through the user’s handset for further emergency audio. This information is invaluable if you need to notify the emergency services.