THE PSNI say 35 petrol bombs were thrown and six cars burnt out during serious rioting in east and north Belfast on Tuesday night. 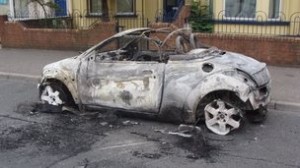 A car burned out during trouble in Belfast on Tuesday evening