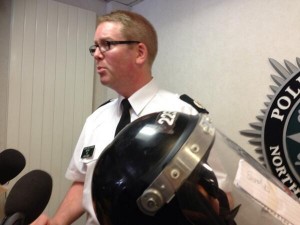 A 12-year-old boy is among the latest arrests over serious violence linked to Twelfth of July parades, police have revealed.

Seven people were arrested overnight on Tuesday and into the early hours of Wednesday morning, bringing the total for the five days to 62.

“One of those arrests last night was of a 12-year-old child and I would like us to stop and reflect for a moment on that detail,” said PSNI Assistant Chief Constable Will Kerr.

“A 12-year-old child was arrested on the streets of Newtownabbey at 1am for being engaged in attacking police.

“Apart from how frighteningly irresponsible it is to allow a child of that age out on the streets at 1am, to allow them to engage in a riot – it just beggars belief.”

A total of 71 police officers, including 68 from the PSN and three brought in from Great Britain, have been injured while trying to restore order.

An extra 300 mutual aid officers from GB are now due to arrive in Northern Ireland, with 1,000 having previously been deployed – half of whom have since returned to their own bases.

On Tuesday night, during the fifth consecutive night of violence, 35 petrol bombs were thrown and seven cars were burned out.

The majority of the petrol bomb attacks happened at Templemore Avenue in east Belfast, after large crowds gathered in the Lower Newtownards Road area.

There were also pockets of disorder in the north of the city – including an attempt to hijack a bus on the Crumlin Road.

“The number of people involved in the disorder was lower than on previous nights,” a PSNI statement said.

“Four cars were set alight in the Templemore Avenue area of east Belfast, a car was set alight in Mount Vernon, with a car and a moped set alight on the O’Neill Road in Newtownabbey.”

The 15-year-old youth arrested overnight in Newtownabbey has since been charged with riotous behaviour in relation to the O’Neill Road disturbances. He is due to appear at Belfast Youth Court on Wednesday afternoon.

Also in Newtownabbey, a 36-year-old man has been charged with possession of petrol bombs. He is due before court in Belfast on Thursday. 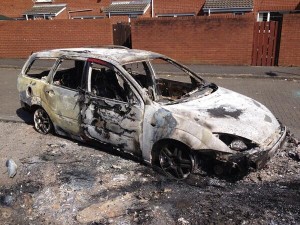 A 30-year-old man has been charged with riotous assembly, obstructing police and resisting arrest in connection with trouble in the New Lodge area of Belfast.

He will appear at Laganside Magistrates’ Court on Thursday.

The disorder first broke out on Friday night, in response to a Parades Commission determination banning the Orange Order from marching their return Twelfth parade past the Ardoyne shops.

At least 125 petrol bombs have since been thrown and 51 baton rounds fired by police.

On Wednesday, Northern Ireland Secretary of State Theresa Villiers joined ACC Kerr to speak out against the intense violence.

“It is vital that we see calm return to the streets of Belfast,” she said

“It’s a huge concern that so many officers have been injured. The reality is it could so easily be a situation where we were talking about very serious injuries or even fatalities.”

“Those scenes are appalling for the communities concerned, hugely fraught with risk for the police and bad for Northern Ireland as a whole.”

Former US envoy to Northern Ireland Richard Haass will engage in a “fact-finding mission” in Belfast on Wednesday, ahead of talks he will be chairing later in the year aimed at resolving a range of contentious issues such as parading and flags.

The American diplomat, who was the US special envoy during George Bush’s tenure as president, has been chosen by the Northern Ireland Executive to lead the all-party discussions.

It is hoped the talks can bring forward a series of recommendations by the end of this year.

First Minister Peter Robinson and deputy First Minister Martin McGuinness said: “We are deeply grateful that an international figure of Dr Haass’s standing has agreed to facilitate these important discussions, which we hope will provide long-term and sustainable solutions that are in the best interests of the community.”

A motion put forward by the Democratic Unionist Party, which criticised the Parades Commission’s determination on the Twelfth of July, was passed by 43 votes to 42.

But petrol bombs and masonry were thrown at police during Tuesday night’s disorder in east Belfast which lasted for over two hours, although there were no reports of any injuries.

Police were attacked with petrol bombs and a car was set alight. A hijack attempt was made on a bus in the Crumlin Road area and youths placed items on North Queen Street and set them on fire, while petrol bombs and other missiles were thrown.

Outside of Belfast, a car and moped were set alight in Newtownabbey during disorder which started at 11.15pm and ended at around 1.40am. Police were attacked with masonry and paint bombs and two petrol bombs were thrown at a police vehicle.

Police said: “A number of fireworks were let off by the crowd and a number of golf balls were thrown, however there was no serious disorder.”