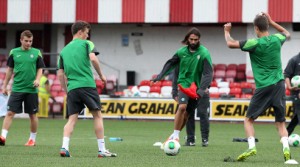 CLIFTONVILLE bosses have urged Celtic fans not to wear the club’s famous green and white Hoops in Belfast’s city centre.

Thousands of Hoops fans are expected in the city for the first round Champions League qualifier against the Reds on Wednesday night – but Cliftonville director David Begley has issued the visitor’s supporters with a safety warning.

He said: “Belfast city centre is a very welcoming place but people are very sensitive about colours, not just this week.

“As a result, it’s probably best to avoid wearing colours into the city centre tomorrow.

“I would say to all fans to make your way up to Cliftonville Road from the city centre.  There are lots of friendly pubs here and indeed our own bar, the Cliftonville Social Club.

“By doing that you can avoid difficulties. It can be tricky as 100 yards in the wrong direction and you could be in the wrong place.”

The warning follows four nights of serious violence in the city after protestors took to the streets angered by the Parades Commission’s decision to prevent the Orange Order’s return parade past the Ardoyne shopfronts.

When asked what provisions the PSNI have made for the clash, a police spokespersonsaid: “As with any major event, police will take all relevant information into consideration beforehand in order to provide an appropriate and proportionate policing operation to ensure the safety of the public and the success of the event.”

Meanwhile, Celtic boss Neil Lennon has said that he hopes Wednesday ‘s match with the Irish League Champions will be remembered for the right reasons.

The Hoops boss was asked about the recent violence in the city at a press conference ahead of Wednesday night’s match. 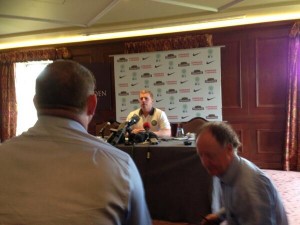 “Preparations have gone really well so far – it hasn’t had an impact on us. I’m just, you know, hoping the night will be remembered for all the right reasons,” he said.

“There might be things going on in the background that police are working hard at but as far as we are ware this has been an normal Champions League trip.”

The Hoops reached the knockout stages of last season’s competition and return to action little more than seven weeks after drawing the curtain on their 2012/13 domestic campaign.

But striker Georgios Samaras insists he and his team mates and raring to go.

“It feels like yesterday we played the Scottish Cup Final but it’s a new season, a new start and everyone is ready,” said  the Greek striker, who joined his Celtic team mates in a Solitude training session on Tuesday evening.

“The Champions League will be harder than last season because there are more rounds to play to reach the group stage but that is our target and what we want to achieve.

“If we are not focussed and don’t play 100 per cent, the game will not be easy. It’s a tricky game.”

Asked how he identified with the fact his Cliftonville counterparts will report for tomorrow’s match following a day at  work, Samaras said: “They are part-time, but we can’t feel bad for them.

“They are an opponent and we must treat them the same as anyone else and, even if they have jobs during the day, they still do the same things as us when we play football.

“We have worked just like we would for any other match and the Manager has shown us clips of how they play and set pieces, which is just what we would do before every game.

“Everyone knows we are favourites but we need to prove it and it’s all about the 90 minutes on the pitch.

“We need to be really focused on our game and need to realise that tomorrow the season starts and be ready.”