POLICE are dealing with trouble in north and east Belfast on Tuesday night.

In east Belfast, two cars have been hijacked and set on fire in Templemore Avenue close to the former library.

Petrol bombs have also been thrown at police on the lower Newtownards Road.

Motorists are advised to avoid the areas because of the large crowds which have gathered.

Riot squad officers have moved into the nationalist New Lodge Road area after a car was hijacked and set on fire.

The PSNI ‘Hawkeye’ helicopter is now hovering above the area in a bid to help officers on the ground identify those involved in the trouble.

PSNI chiefs fear the hijacking could be a ‘come on’ from dissident republicans to open fire on investigating police.

In north Belfast, loyalists marched up to a police cordon on the Crumlin Road accompanied by a band along with several hundred supporters.

After an hour, the band dispersed but crowds are still in the area.

A crowd of around 100 set fire to a number of barricades on the Woodvale. 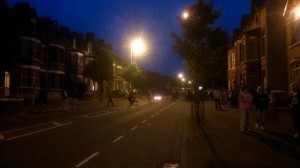 But they soon dispersed when riot squad police moved into the area.

There was also a protest on the Shore Road near the Mount Vernon housing estate.

Police on the ground have reported that youths have filled wheelie bins full of bricks and masonry.

A police spokeswoman said that there were also “pockets of violence” in north Belfast at Mount Vernon, Woodvale Road and North Queen Street.

The public should avoid these areas, she advised.

In Portadown, loyalists claim nationalists have belted them with golf balls in the Obins Street area.

Police are at the scene.


3 Responses to BREAKING NEWS….TROUBLE ERUPTS IN NORTH AND EAST BELFAST