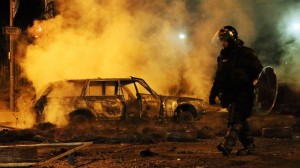 A POLICE officer was injured during a proactive operation to seize materials in the Woodvale Road area of north Belfast.

The PSNI say at least six petrol bombs and various other missiles were thrown at police officers.

Two baton rounds have been fired by riot police.

“Water cannon was not used at this time,” the spokesman added.

A stand off continued through the night between crowds and police.

Petrol bombs, fireworks and stones were thrown at police lines as officers dealt with running skirmishes at the bottom of Woodvale Road.

At one stage police moved crowds towards the Ballygomartin Road where a number of petrol bombs were thrown.

Meanwhile, a barricade was erected on the Shore Road at its junction with Mount Vernon.

It is understood a car was hijacked and set alight in the area.

Industrial bins were also set on fire at the entrance to the loyalist estate as a crowd of up to 70 gathered.

Part of the road was closed by police and motorists were advised to avoid the area.

Earlier more than 300 loyalists, including Orangemen, gathered at Twaddell Avenue where a peaceful white line protest took place in the afternoon.

A group of nationalists also gathered from the other side of the Ardoyne roundabout but later dispersed.

It comes after the Parades Commission ruled that an Orange Order parade could not walk past the mainly nationalist Ardoyne area on the Twelfth of July.

Bands and lodges were stopped by police at Twaddell Avenue.

Ugly scenes followed as the PSNI came under attack with missiles. A total of 32 officers were injured during six hours of rioting.

The Orange Order had called for protests against the Parades Commission’s ruling; however this call was suspended in the wake of the violence.

Eight people were remanded in custody on Sunday, one pleaded guilty and a tenth was released on court bail.