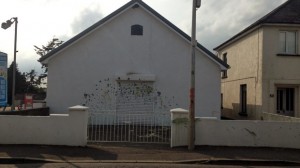 Bellaghy Orange Hall was attack with green and yellow paint

POLICE are investigating after green and yellow paint was thrown over an Orange Hall.

The building in the William Street area of Bellaghy was targeted in the early hours of Friday.

Different shades of paint were splashed over the yard, wall and front of the hall.

Sandra Overend of the UUP condemned the attack but said local lodges were not deterred from enjoying their annual Twelfth celebrations.

Police asked anyone with information on the paint attack to contact them on 0845 600 8000.