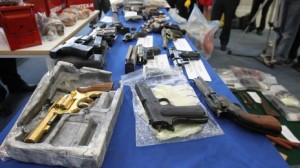 GARDAI say they have made their biggest ever find of dissident republican weapons and explosives.

Guns, ammunition and 15kg of semtex explosive were found on land at the Old Airport Road in Cloghran, north Dublin.

Superintendent David Taylor said the seizure was a major blow to the activities of dissident republicans.

The arms were retrieved last week and included former Provisional IRA weapons, according to Gardaí.

They told the Irish state broadcaster, RTÉ, that the semtex they discovered is old and very different from what is currently available, which is more rigorously controlled and harder to acquire.

More than 1,300 rounds of ammunition and a replica golden gun were also recovered at the scene.

The weapons were found after Gardaí searched containers in a yard in Cloghran at about 4PM on Wednesday, July 3.