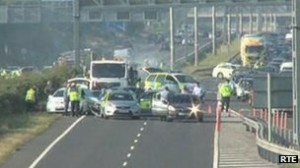 THREE men are in custody in the Republica after a car believed to have been stolen in Northern Ireland was involved in a police chase along a motorway.

Gardaí said they “intercepted” the car on the M1, just outside Dublin, at about 5.30 pm on Wednesday and arrested three men.

A number of Garda cars were damaged as the vehicle was brought to a halt but a garda spokeswoman said no-one was hurt.

The three men are being questioned at Ballymun Garda station.

The southbound lanes of the M1 were closed at the M50 junction for a number of hours on Wednesday evening while police carried out their investigation.


One Response to GARDAI RAM STOLEN NI CAR ON MOTORWAY