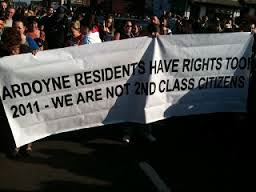 A nationalist residents’ group is to hold a protest as Orangemen pass through Ardoyne on their way to Twelfth celebrations in Belfast.

Greater Ardoyne Residents Coalition (GARC) has done a U-turn after saying on Wednesday it would not hold any protest.

GARC along with CARA (Crumlin and Ardoyne Residents’ Association) said yesterday they were calling off planned protests against an Orange parade on Friday, July 12.

Sinn Féin MLA Gerry Kelly said it was “a sign of good faith”.

But on Thursday morning, GARC has announced it will now hold a protest as Orangemen walk past the Ardoyne shops.

The Parades Commission ruled on Tuesday that the Orange Order cannot hold a return parade past Ardoyne shops.

In recent years there has been serious rioting in the nationalist Ardoyne area after the parade.

The commission has said Orangemen can walk on the stretch of the Crumlin Road in the morning, but not in the evening.

The Grand Orange Lodge of Ireland has called the decision “ludicrous” and damaging to community relations.

In a statement the order said the decision “effectively signed the death warrant of this discredited and unaccountable quango”.

The statement called for a peaceful day on 12 July.

“While violence may have closed this thoroughfare to a dignified parade; conversely, it will not open the road either,” the Grand Lodge said.

The DUP said many would see the Parades Commission decision as “a reward for violence”, but Sinn Féin called it “sensible”.

The ruling is that on the return parade, lodges will be stopped at the junction of Woodvale Road and Woodvale Parade. They have been prohibited from walking between that point and the junction of the Crumlin Road and Hesketh Road.

First Minister and DUP leader Peter Robinson said the rationale behind the determination was “deeply flawed”.

“This wrong-headed approach will do little to build respect and tolerance for cultural diversity. Many will interpret this as a reward for violence and intolerance in light of events in the area last year,” he said.

“The initiative taken by the local lodges in their recent engagement with residents was the right thing to do and was warmly welcomed throughout the community. Regrettably that progress has not been recognised.”

He called on everyone to work towards a peaceful outcome.

“Once again it is clear that any truly lasting solution to parades will involve the abolition of the Parades Commission,” he said.

She said she recognised there was anger in the loyalist community because of the Parades Commission ruling, but said people should obey politicians’ calls to remain peaceful.

SDLP assembly member for North Belfast, Alban Maginness, said the ruling was “significant” and had the “potential to defuse tensions and to reduce the possibility of violence”.

“The determination talks about the heavy toll on the PSNI at this location in the past and then proceeds to reward that violence against the police by banning the return parade that was always lawful, peaceful and respectful. The Orange Order has not been involved in violence yet it has its legal right to peaceful parading blocked,” said councillor Mark Cosgrove.

The Orange Order had talks with CARA (the Crumlin and Ardoyne Residents’ Association), a nationalist residents’ group in north Belfast, last week ahead of the 12 July parade, but these ended without resolution.

The commission said that if there was “sustained and sincere dialogue”, and the Orange Order respected this year’s determination, it expected any future commission to “look favourably” upon the Order’s application for a return parade at Ardoyne next year.

Another residents’ group, the Greater Ardoyne Residents’ Collective (GARC), applied to the commission for an “equality and civil rights march” in north Belfast at 2pm on the Twelfth day.

It ruled their march could not take place on the Crumlin Road and it had to finish by 3pm.

But following the commission’s ruling, the group has called off that protest. It still plans to stage an early morning protest.

On Tuesday it was announced that police officers from the rest of the UK are being brought in to support officers in Northern Ireland for 12 July Orange Order parades.