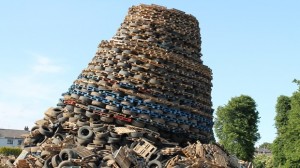 A HUGE 11th night bonfire packed with pallets and tyres has collapsed.

The 40ft high structure collapse under its own weight on the Ballycraigh estate in Antrim.

The bonfire had been built to local homes and the dangers that could have been posed if it had collapsed in their direction – or while burning.

And in the Ballyduff estate in Newtownabbey, a huge bonfire had to be moved recently after residents raised concerns about its size and proximity to houses in the area.

In Articlave near Coleraine, NIE has said it will have to cut power to homes for up to 12 hours in a bid to protect electricity lines from a bonfire which has been built too close to the overhead cables.

A number of other bonfires continue to use tyres – despite it being illegal to burn them due to the toxic fumes emitted – and blue pallets which should also not be destroyed.

The Fire and Rescue Service has already urged those building and attending bonfires to think about their safety and that of others.

But this year, there have already been a number of causes for concern in the run-up to the Eleventh.

As well as making appeals over safety, the NIFRS is reminding people that, if firefighters show up at a bonfire, it is only because someone in the local community has been concerned enough to call 999.

“If we are called out to attend a bonfire-related incident, I am asking the community for their support to ensure that firefighters are able to carry out their job without fear of attack or harassment,” Assistant Chief Fire Officer Dale Ashford said.