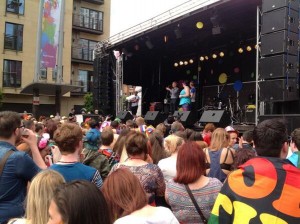 THOUSANDS of people swamped Belfast on Saturday for this year’s Pride Parade.

The Pride Festival was honouring this year PA Mag Lochlainn, a veteran gay rights campaigner who passed away last November.

He was a founding member of Belfast Pride, a demonstration for equal rights which has now also become a ten-day celebration of Northern Ireland’s lesbian, gay, bisexual and trans people.

Beginning in 1991 with around 100 people taking part in the first parade it has grown to a huge scale, last year up to 30,000 people attended the main event.

Starting at noon, the main parade of walking groups and floats left Custom House Square for a circuit around the city.

The Party in the Square has gotten underway at Custom House Square- headlining the free event is Spanish singer Ruth Lorenzo, previously an X Factor finalist in 2008.

Family entertainment and activities will be organised all day at the Pride Village beside Lagan Weir.

This year saw the first time a Belfast Lord Mayor has written an introduction for the official programme, Sinn Féin’s Máirtín Ó Muilleoir is also attending the parade on Saturday.

From midnight Belfast City Hall was lit in rainbow colours to mark the main festival date.

Usually held in August, the 2013 Pride events were moved forward by a month to facilitate the World Police and Fire Games.

“Over the years, as a supporter of Pride, I have been heartened to see it grow and develop from a small event into one of Belfast’s biggest festivals,” she said.

“The LGBT community has, together with other progressive people across society, courageously faced down bigotry and inequality.

“Today Pride stands as a city-wide celebration of the LGBT community. It is a friendly, fun, inclusive festival, which brings together people of all ages, backgrounds and abilities. It also reflects an increasingly vibrant, tolerant and diverse city.”

The Alliance Party leader said: “Pride provides an excellent opportunity for staff from my Department, and other organisations in the justice sector, to talk to members of the LGBT community, their friends and family, about issues important to them.”