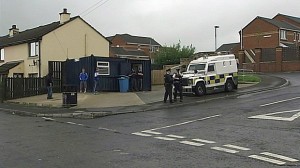 POLICE on both sides of the border have carried out searches and arrests as part of an intelligence-led offensive against dissident republican terrorists.

A total of 12 people have been detained for questioning by the PSNI and Gardaí over the past 24 hours.

And explosive parts, ammunition and the proceeds of terrorist fundraising were also seized as part of the crackdown.

In Derry, detectives from the PSNI’s Serious Crime Branch swooped in the Creggan area and carried out searches.

They seized cash and a quantity of cigarettes.

A statement said: “The police investigation is continuing.”

In Dublin, nine people have been arrested in relation to dissident activity.

Eight men were detained in the Tallaght area on Wednesday evening following the search of a house.

It was carried out by officers from the Garda’s Special Detective Unit and Crime & Security Section.

The suspects, aged from mid 20s to 40s, were arrested on suspicion of being members of an unlawful organisation.

They are being held various Garda stations in the west of the city under the provisions of Section 30 Offences against the State Act 1939.

Earlier on Wednesday, gardaí searched a number of containers in a yard at Cloghran, Co Dublin.

A quantity of ammunition and component parts of explosive substances were found.

A 46-year-old man was arrested at the scene and is currently detained at Ballymun Garda Station under the same act.

A gardaí spokesperson said that investigations are ongoing.

The trio, all aged in their 40s who are all from the Lurgan area, are being questioned about dissident republican terrorist activity in the north Armagh area.