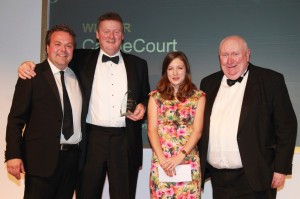 NORTHERN Ireland shopping centre CastleCourt and local security company Mercury Security Management have been named the Best Security Team in the United Kingdom and Ireland at a prestigious industry awards ceremony in London.

The SCEPTRE Awards, run by Shopping Centre Magazine, are the ‘Oscars’ of the shopping centre industry.

And they recognise the best practice and the best people throughout Britain and Ireland, putting the spotlight on management teams, retailers and suppliers that demonstrate real excellence.

At a glittering ceremony in London’s Dorchester Hotel, the Northern Ireland double act of CastleCourt and Mercury beat off all competitors to win the Best Security Team award.

Runner-up was Gunwharf Quay in Portsmouth while other short-listed centres included Westfield in London, Dalton Park in Durham, Middleton Grange in Hartlepool.

Stewart McConnell, CastleCourt Security Manager, said: “At CastleCourt we pride ourselves on the excellent standards of security we have maintained over the years so we are thrilled, both for ourselves and for our partners at Mercury Security, to receive this accolade from our industry.

“Ours is very much a customer-focussed security operation and we are extremely happy to be working with Northern Ireland’s premier local security company which has an in-depth knowledge of local issues and, more importantly, how to address those issues.

“Mercury’s experience as Northern Ireland’s leading security company for major shopping centres and retail outlets is second to none.”

Liam Cullen, Mercury’s Regional Director UK and Ireland, said: “We are delighted to receive this prestigious award which recognises the wonderful work that has been carried out by CastleCourt and Mercury Security staff and is a credit to the hard work and commitment of the entire team.

“Our integrated solution of manned guards alongside the latest in CCTV technology, monitored by our award-winning NSI Gold ARC/RVRC Monitoring Centre, continues to provide vital protection to the Centre and its tenants and it is nice to see this gain national recognition.”

“CastleCourt Security Manager Stewart McConnell works in partnership with MercurySecurity Management to lead a 16-strong on-site team which has made a massive contribution to the reduction of city centre crime.”

CastleCourt first opened its doors in 1990 and with an annual footfall of 14 million customers and over one million vehicles using the centre every year, the Centre’s security requirement is one of the biggest in Northern Ireland’s retail industry.

Founded in 2001, Mercury Security operates out of offices in Lisburn, London and the Republic of Ireland and boasts an impressive portfolio of retail clients and shopping centres including the Kennedy Centre, Abbey Centre, Park Centre, Connswater and Bow Street Mall.