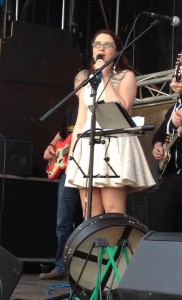 ANDREA BEGLEY, winner of The Voice, has confirmed her first concert for Northern Ireland.

The 26-year-old will perform at the Ulster Hall on November 3.

The partially-sighted singer from Pomeroy, Co Tyrone,  chose to sing My Immortal by Evanescence, then joined her mentor’s Danny O’Donoghue’s band The Script to perform Hall Of Fame and finally sang Angel by Sarah McLachlan before being announcing the winner of the second series of the BBC1 singing competition.

On Friday evening, Andrea took to the stage in her home town on Pomerory to perform and thanked everybody for their support. She was also presented with a civic award by Cookstown District Council to recognise her achievement.

After winning The Voice, Andrea was signed in a joint deal with Island and Polydor Records.

Tickets for Andrea Begley Live at the Ulster Hall Belfast go on sale Friday 5 July at 9am.