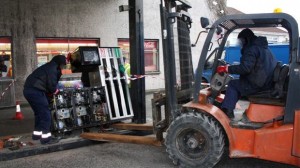 The plants in Crossmaglen, Co Armagh, and Coalisland and Dungannon, Co Tyrone, were together capable of producing 15m litres of fuel and evading some £10m in unpaid duty.

Pumps, tanks and equipment were removed from each site and police and HM Revenue and Customs officers said investigations are continuing.

“Our activity over the last week has not only stopped a large amount of laundered fuel entering the legitimate market, but 22 tonnes of toxic waste was also removed from these three sites,” said John Whiting from HMRC.

“This chemical sludge would otherwise have been dumped indiscriminately in our countryside.

“Buying illicit fuel not only funds crime, but also supports and encourages this dangerous activity within our communities.”

The first illegal fuel plant was found hidden in farm buildings in Crossmaglen on Thursday, before a second was found in a disused agricultural shed in the same area the next day.

Then on Saturday, in unrelated activity, HMRC officers removed 2,500 litres of suspected illicit fuel from a filling station forecourt in Coalisland.

A third plant was discovered later that day following a search at an address in Dungannon.

Four men have also been arrested – three from South Armagh and one from Co Tyrone – on suspicion of involvement in fuel fraud.

They were questioned and released pending further enquiries.