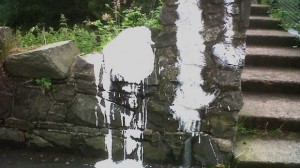 POLICE are investigating after paint has been thrown over a plaque a King William of Orange plaque.

The sectarian attack happened at the spot where King William crossed a Co Down river on his way to victory at the Battle of the Boyne.

Police received a report on Friday at 8.50am that the commemorative plaque on Dunbar Road in Banbridge had been damaged.

Graffiti had also been painted on Dunbar’s Bridge, where the sign was erected.

A spokesperson for the Orange Order’s Banbridge District said that the graffiti was pro-republican.

The plaque was unveiled two years ago by local Orangemen following a re-enactment of King William’s 1690 crossing of the river.

“While the District Hall has suffered similar paint attacks in years gone by, this is unfortunately the first sign of republican attacks on our culture in Banbridge in recent times,” the spokesperson added.

“The mindset of those involved must be questioned, particularly given the historical significance of the plaque, which is looked upon with great pride by the overwhelming majority of the local community.”

He added: “Rather than engrossing themselves in reckless vandalism, the culprits would be much better served learning more about our shared history and the positive implications of the Glorious Revolution on today’s society.”

Police are appealing for anyone who noticed unusual activity in the area to contact them on 0845 600 8000.