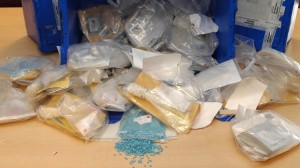 EXCLUSIVE: THE son of a one-time senior UVF figure in east Belfast died this week from a tablet police are now warning has fatal side effects.

Sources said he died as a result of taking an Ecastasy tablet, one from a batch of green ‘Rolex’ drugs which police believe is made up to of a deadly cocktail.

Hundreds of people attended the service for 26-year-old ‘Alio’ MacKenzie which was held at Roselawn Crematorium on Saturday morning, June 29, at 9.30 am.

Many leading figures from the UVF in east attended.

His dad, Alan ‘Bloodnut’ MacKenzie was once a leading figure within the UVF in east Belfast.

Nowadays, he lives most of the year on the Costa Del Sol but is still close to the UVF ‘s leader in east Belfast Stephen Matthews.

‘Bloodnut’ MacKenzie was once caught and charged with importing millions of cigarettes into Northern Ireland with republicans based along the south Armagh/north Louth border.

The 53-year-old was on of five men arrested as part of a Customs and Excise probe into the illegal importation into Northern Ireland of 340 million bootleg cigarettes which cost the public purse £65 million.

‘Bloodnut’ Mackenzie and the gang were arrested in March 2003 after a boat docked at Warrenpoint Harbour from Rotterdam with 60 million cigarettes.

However, MacKenzie and his co-accused later walked free after a Crown Court trial.

The death of his son ‘Alio’ is one of eight being investigated by PSNI detectives.

Officers have warned the public to be cautious if they are offered green tablets.

Seven people in the greater Belfast area and one person in the north west have died unexpectedly.

Police have advised members of the public not to take controlled drugs, medication that has not been prescribed or to mix drugs with alcohol.

The PSNI said: “The consequences of ignoring this advice are very dangerous and potentially life-threatening.”

They specifically mentioned green tablets with a crown or castle logo.

The police said they cannot confirm that all of the deaths are drugs related, and are awaiting toxicology results.

Following the deaths, the Public Health Agency invoked its early warning system to raise awareness of the risks of drugs misuse.

Owen O’Neill from the agency said: “You can never be sure exactly what’s in non-prescribed drugs. They could be cut with other cheaper drugs such as tranquilisers or even toxic substances.

“Therefore, taking any substance that hasn’t been prescribed for you potentially puts you at risk.

In addition, combining these substances with alcohol, or other drugs, further increases the risks and the advice from the PHA is to never mix alcohol and other drugs.

“The same advice also applies to taking alcohol with prescribed medication,” he added.

The PHA also warned of the dangers of legal highs, which are unregulated and can be perceived as being low-risk.