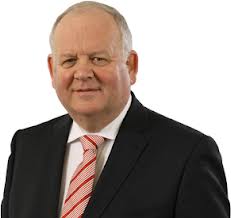 DUP MLA Jimmy Spratt has apologised for saying those opposed to the Maze development were “nutters”.

The apology comes after he initially denied he had made the claim when challenged by UUP leader Mike Nesbitt.

On Wednesday a heated exchange broke out between the pair following a two-hour OFMDFM committee meeting.

First and deputy First Ministers Peter Robinson and Martin McGuinness were present before the committee for over two hours, but the incident happened after they had left.

It focused on whether Mr Spratt had said those who oppose the development at the Maze Prison were “nutters” or not.

The south Belfast assembly member called for an apology from Mr Nesbitt for his remark.

“It’s the usual way that you try to spin things on the media and everything else – to suit your own agenda,” he said during the outburst.

“I certainly was not calling anyone in this room or indeed people who have opposition to the Maze nutters.

“So get your facts right before you try to spin and make statements in future and if you have any guts at all, you’ll apologise for not independently chairing the meeting at that point.

“My comments were in no way related to any of the genuine people who have expressed concerns about the Maze project.”

But Mr Nesbitt remained adamant during the meeting about what the DUP MLA had said.

“I know what I heard Jimmy,” he responded. “You know what you said.”

Mr Spratt continued: “I’m not going to let you spin it anymore, because you are absolutely pathetic in terms of how you try to spin things on a regular basis, so I want no more comment about it.”

He added: “We’ll see if it’s in the record in Hansard.”

But on Thursday the official Hansard report confirmed that Mr Spratt had indeed made the remark.

Mr Nesbitt said: “Hansard has now been published and is very clear.

“During a comment from DUP MLA, Brenda Hale saying: ‘there is no local opposition to the Maze or the buildings within it’, Mr Spratt is quoted as saying: ‘Except the nutters’.

“Mr Spratt now knows what he has to do. The ball is in his court.”

Later on Thursday, Mr Spratt issued an apology and said his remarks were not directed at those with “genuine concern” about the project.

“In common with other DUP representatives I have been subject to a great deal of personal abuse, often from people who prefer to hide behind online anonymity,” he said.

“As someone who served for many years in the Royal Ulster Constabulary and lost many close friends to terrorists I find such comments particularly personally hurtful.

“I attempted to make it clear at the time that my remark was not directed at any groups or individual.

“However, I apologise sincerely for any hurt caused to those who believed my comments were directed at them.”


One Response to SPRATT APOLOGISES OVER MAZE ‘NUTTERS’ SPAT WITH NESBITT