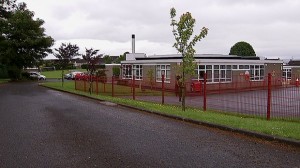 A YOUNG boy was bitten in the face by a dog at a Co Antrim school.

A teacher brought the Alaskan Malamute husky-type dog into the playground at Carniny Primary in Ballymena around 9am on Friday.

The animal is believed to have bitten the boy in the face while under staff supervision.

It is understood the primary one pupil was brought to the Antrim Hospital by his parents, and transferred to the Ulster hospital.

Mr Ross said staff and pupils are devastated by what happened, and they have passed on information to the police and other statutory bodies.

Ballymena Borough Council confirmed the dog has been destroyed.

A council spokesman said: “Our thoughts are with the child and his family at this distressing time.

“A representative from Environmental Health attended the school following the incident and, having liaised with those involved, instigated appropriate actions to seize the dog.

“The dog has now been put down.

“Ballymena Borough Council is working alongside all appropriate organisations to carry out a full investigation.”

The Health and Safety Executive are investigating the attack.

North Antrim DUP MLA and chair of the Stormont Education Committee Mervyn Storey said: “Our thoughts and prayers are first and foremost with the wee boy who is at the centre of this and with the staff and everybody involved in this situation.”


2 Responses to DOG DESTROYED AFTER BOY MAULED AT SCHOOL