REVEALED: THE COUPLE AT THE CENTRE OF THE TRAGIC MURDER SUICIDE IN SPAIN 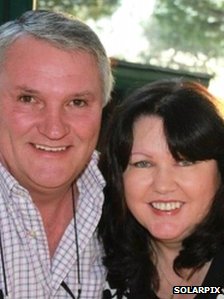 Philip and Sheila Wood were found at their villa home in Mijas along with their 28-year-old daughter Sophie.

Mrs Wood and her daughter were found in the bedroom of an apartment and Mr Wood’s body was in another room, police said.

The women both held Irish passports and Mr Wood was British.

The couple, in their 50s, lived in Spain with their daughter – who was understood to have had a disability.

The police’s “initial hypothesis” was that the deaths were a murder-suicide, it’s been reported.

It is thought the three died from gunshot wounds.

The Department of Foreign Affairs in Dublin said it was liaising with Spanish police and was also trying to contact the dead women’s relatives.

The Foreign Office in London confirmed that Mr Wood held a British passport. It said it was liaising closely with the local police and was “ready to provide consular assistance”.

Spain’s Guardia Civil said the house was rented and the landlord had raised the alarm.

“The latest information we have is that the owner of the house had not heard from the family for a few days and had not been paid,” a police spokeswoman said.

“He went to the house [on Wednesday] and when there was no reply at the door, he went inside. Inside he saw the man dead on the sofa and immediately called the Guardia Civil.

“When officers inspected the house, they found the wife and the daughter dead in a bedroom.”

Police found the bodies of the two women covered with a blanket, the Spanish news agency EFE reported.

An official with Spain’s Interior Ministry said the family had lived for a long time in Mijas, which is a popular resort, inland from the Andalusian coast.

Reports quoting neighbours suggest the man was British and that they had heard three shots in the area several days ago.

The bodies have been removed and the building is cordoned off.

The dead are expected to be formally identified after post-mortem examinations have been carried out.


One Response to REVEALED: THE COUPLE AT THE CENTRE OF THE TRAGIC MURDER SUICIDE IN SPAIN