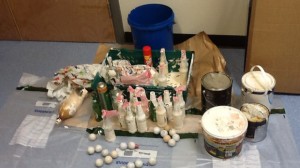 The haul of paint bombs, golf balls and other items seized by the PSNI

The officers were on patrol in Portadown at around 10.10pm in the Garvaghy Road area when they noticed the activity near the park.

The youths who had been attempting to lift a wheelie bin into the grounds of the park made off after spotting police.

The bin along with two others located nearby were found to contain a large number of paint bombs, bottles with rags in the necks, golf balls, tins of paint and various other items.

The items were seized and taken away for further examination.

Said Area Commander Chief Inspector Anthony McNally: “I must firstly praise our officers who have removed a large number of dangerous items from the streets of Portadown.

“However, whilst I welcome the removal of these items, I must also stress my concern that they were there to begin with.

“Police along with our partners in the local community have been working hard to ease tensions in the area, particularly in the run up to the busy summer months, though it would seem that some elements are determined to prepare for, and to cause trouble.

“I believe this to be a very small minority and call upon parents, community representatives or anyone with influence in the community to send a message to those intent on violence that it is not welcome on our streets, and hinders the positive image of Portadown the vast majority of us wish to see.”

CI McNally asked anyone who noticed any suspicious activity or who has any information to contact PSNI on 0845 600 8000.