‘BEAST’ OF A BONFIRE ON THE MOVE 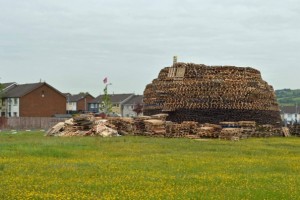 A BONFIRE dubbed ‘The Beast’ is to move an alternative site away from resident’s home.

Organisers of the bonfire took the decision on Wednesday following a meeting with representatives from Newtownabbey Council, the Housing Executive, the Fire Service.

Local residents at the meeting voiced concerns that the bonfire presented a real danger to life and property.

They also expressed fears about the health risks posed by the burning of tyres.

Work by bonfire builders and council staff to move the massive pile of wooden pallets to the sloped grass area on the opposite side of Forthill Drive began early on Thursday morning.

It’s understood that tyres will be removed from the site during the process.

“They (the bonfire organisers) listened to the residents and common sense has prevailed. They agreed to move the bonfire and to take the tyres off it, which is great. It’s a good result all round.”

One local householder who was at the meeting also welcomed the move to relocate the bonfire.

“Credit to these lads to make this decision and take the concerns of the residents seriously – they are working with their community,” she said.

It’s understood that efforts will be made in the coming months to try to secure an alternative, more suitable and safer site within the estate on which to hold future bonfires.

A Facebook page about the bonfire has been tracking its progress over recent weeks, charting efforts to make the pile of pallets one of the largest built for the Eleventh Night.

But it emerged that there were serious fears for the nearby houses ahead of the lighting of the bonfire, with suggestions firefighters may have to douse homes with foam in a bid to protect them from flames and sparks.

A post made by the organisers on Wednesday said a decision had been taken not to continue adding to the structure.

“No more materials will be added to it …” said the Ballyduff organisers in a statement.

“Under no circumstances will we put our own people’s properties at risk.

“This decision was made for the safety of the residents and their properties. Our hands have not been forced in any way by anyone.”

Local politicians have welcomed the move.

Earlier on Wednesday, Belfast Daily reported that housing chiefs believe more than a dozen properties are at risk of serious fire damage if a July 11 bonfire on a Co Antrim housing estate goes ahead as planned.