‘WE ARE LUCKY TO BE ALIVE,” SAYS MUM OF DISABLED SON RESCUED FROM NORTH BELFAST FIRE 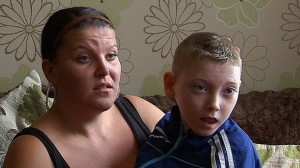 LUCKY TO BE ALIVE: Aisling Campbell and her disabled son Pearse who were rescued from a house fire

FIRE crews pulled a young mum and her disabled child to safety from a house blaze in north Belfast.

And the mother has revealed that if it hadn’t been for a hawk eyed passerby she and her son would have “drifted off to sleep and never woke again.”

The fire started in the house on Hallidays Road, in the New Lodge district, around 4.30am on Tuesday.

The Fire and Rescue Service was alerted after a passerby heard the smoke alarm ringing and phoned the emergency services from a pay phone.

The blaze broke out at Aisling Campbell’s Hallidays Road home in the New Lodge at around 4.30am on Tuesday.

The Fire Service was alerted after a member of the public heard the smoke alarm ringing and phoned the emergency services from a pay phone.

She explained: “There were people at the window on a ladder and the fella was shaking me awake. It was a bit of a shock. I couldn’t believe it.

“I didn’t know it was happening, we didn’t hear the smoke alarms going off.

Whoever it was thank you for ringing them because we got out safe. I’m just happy that he isn’t hurt.”

Paramedics checked over the mother and son and although the pair escaped unhurt, Ms Campbell said she was shaken by what had happened.

“Pearse can’t walk and he can’t get himself to safety. It’s just scary that he was not able to wake himself up and get out the door himself,” she said.

The young mum still does not know who raised the alarm, but she said they had a lucky escape.

Ms Campbell added: “It was lucky they did ring the Fire Service and they did gain access to the property at that time.”

“We probably would have drifted off into sleep and probably never woke up from it.”

Gerry Lennon, fire commander of South and East District, said the blaze broke out in the kitchen.

“When we arrived, rews noticed that there was a small fire coming from the cooker,” he said.

He added that they used a ladder to gain access through a bedroom window.

The mother and child were led through the smoke to safety, the fire officer added.

“It was very important that the passerby had heard the smoke alarm and that a working smoke alarm was sounding and used inside the property.”


One Response to ‘WE ARE LUCKY TO BE ALIVE,” SAYS MUM OF DISABLED SON RESCUED FROM NORTH BELFAST FIRE