TITANIC SLIPWAY IN BELFAST TO HOST BBC PROMS IN THE PARK 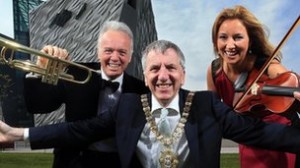 THIS BBC Proms in the Park in Northern Ireland will come from the Titanic Slipway in Belfast.

The concert will be held on Saturday, September 7 and will feature the Ulster Orchestra conducted by David Brophy.

The event will be hosted by Noel Thompson and Claire McCollum and will be live on BBC Radio Ulster, presented by John Toal.

Organisers said the show will include a big screen, “great music and a party atmosphere”.

A selection of television viewing options will be available live on the night via the red button for digital TV viewers and the concert will also be broadcast live online.

BBC NI director Peter Johnston said: “Following on from the success of last year we are very excited to bring the 2013 BBC Proms in the Park in Northern Ireland back again to Belfast and to the Titanic Slipways.

“This event is one of the most prestigious and large-scale events we undertake each year and music lovers can be assured of a very special evening of music and celebration from an eclectic line-up of local and international talent – all set against the stunning backdrop of the Titanic Signature building.”

The event is supported by Belfast City Council.

Lord Mayor of Belfast Máirtín Ó Muilleoir said the council was delighted to see “the local aspect of BBC Proms in the Park stay in Belfast this year”.

“This iconic event will, yet again, take place with the stunning backdrop of Titanic Belfast,” he said.

“As with previous Proms concerts, it will be a night to remember and will add to Belfast’s portfolio of major showcase cultural activities – bringing additional economic activity and media attention to my home city.”

Tickets to BBC Northern Ireland’s Proms in the Park event are complimentary and will be allocated following a random draw and applications can be made made from Monday, 24 June at 9 am until Monday, July 17 at 5pm, with a maximum of four tickets per household.