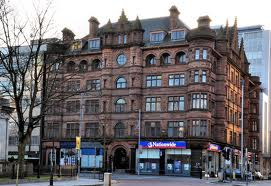 A LANDMARK Belfast city centre building is to be turned into a new boutique-style hotel.

The £12 million development plans to transform the former Scottish Mutual Building will create more than 180 full and part-time jobs.

Tullymore House Limited, which also owns the Galgorm Resort and Spa, near Ballymena, Co Antrim, said two bars and two restaurants were earmarked for the ground and first-floor areas opposite Belfast City Hall.

The upper three floors of the 42,000 sq ft, five-storey building will be upgraded to accommodate up to 40 hotel bedrooms and 10 serviced apartments.

Project manager Colin Johnston said: “This investment is significant for the city.

“It’s a vote of confidence in the prospects for the economy and it will bring a new, exciting dimension to Belfast’s hospitality offering which is backed, supported and driven by successful and experienced hoteliers.”


One Response to PLANS FOR NEW BELFAST CITY CENTRE HOTEL