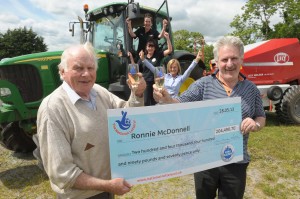 A 75-year-old corn farmer is reaping the benefits of a twice weekly trip to his nearest Costcutter store in Newry after winning a whopping £204,490.70 in the EuroMillions draw.

For years, bachelor Ronnie McDonnell from Knocklore in Ardee, County Louth, has driven to The Village Shop in Jonesborough to buy tickets for the Tuesday and Friday night EuroMillions draws.

Now his regular trips to the County Down store, owned by his pal Seamus McNamee, have struck gold after his usual Lucky Dip ticket matched five numbers and one Lucky Star in the draw on Tuesday May 28.

While the first thing that many National Lottery winners buy is a new house, fancy car or exotic holiday, Ronnie’s thoughts immediately turned to something much more practical for his first big purchase – a brand new state-of-the-art John Deere hay baler.

“This couldn’t have come at a better time,” said Ronnie, who owns a 100-acre corn and livestock farm. “I’ve needed a new baler for some time now but I just couldn’t afford it. Now though, with a couple of hundred grand in the bank, I’m literally going to make hay while the sun shines with a brand new John Deere baler,” he laughed.

At 75 years of age, Ronnie isn’t planning any holidays but a trip to the Listowel Races Harvest Festival in September is on the cards for the farmer who likes a little flutter on the horses.

“I’m fairly sensible with my money so I’ll not be going on any big spending spree,” said Ronnie, “but maybe I’ll afford myself a slightly larger bet than usual on the horses at Listowel this year.”

Ronnie’s windfall is the second winning ticket inside a fortnight to be purchased at a Costcutter store in Northern Ireland, after Sacha Dolan from Strabane, brother of Irish Eurovision song contest entrant Ryan Dolan, scooped £76,908 in Lotto on Wednesday May 15.

According to Ronnie’s friend and retailer Seamus McNamee, good luck is definitely in the air.

“We’re delighted for Ronnie as he’s been a regular customer for years and we’re also delighted to have sold our first big winning ticket,” said shop proprietor Seamus.

“Northern Ireland has definitely been a lucky place to live recently with 20 millionaires being created and many more big winners in the past couple of years alone,” he added.