I AM STILL ON TOP OF THE WORLD, SAYS THE VOICE WINNER ANDREA 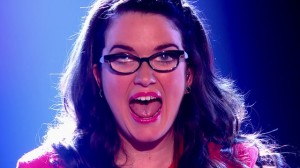 IT’S over 24 hours since Andrea Begley won the BBC’s The Voice programme and it still hasn’t sunk in.

But now the hard work starts for the Pomeroy civil servant after she beat off bookies favourite and Belfast singer Leah McFall.

“I am absolutely thrilled. I am on top of the world. I still can’t believe it,” said Andrea on Monday morning.”

But no one was more shocked than Andrea’s mum and supporters who sat in the audience aghast that she had beat off the favourite to crowned the winner of The Voice by public vote.

“I think they were in total shock. I certainly didn’t expect to win. When Holly read out my name I was totally surprised.

“Performing with The Script it was the best. It such a privilege and an honour.

“The work begins after the show. I have a good idea of where I want to go as an artist.

“I will sit down with the record company and see where we go.

“Danny wants to involved in my career. He has been such a great support up to now.”

And Andrea can’t wait to get back home to Pomeroy, Co Tyrone to see all her relatives and supporters.

“I am looking forward to getting home for a bit of a party.

“Getting to the final is an achievement and I know Leah will go onto great things,” she added.

Andrea had chosen to sing My Immortal by Evanescence, before joining O’Donoghue’s band The Script to perform Hall Of Fame, and then singing Angel by Sarah McLachlan in the final round.


One Response to I AM STILL ON TOP OF THE WORLD, SAYS THE VOICE WINNER ANDREA