DRUG enforcement agencies are jubilant after five members of a Northern Ireland crime gang were jailed on Monday for importing drugs with a street value of £1.2 million.

Seven kilos of cocaine, 44kg of amphetamines and 40kg of cannabis were seized in Northern Ireland and England in February 2010.

Police believe the drugs came from Holland and were moved to England before being taken to County Down.

The men were sentenced to between four and six years and will serve half their sentences in jail and half on licence.

Officers from various agencies, including the PSNI’s Organised Crime Branch and the Serious Organised Crime Agency (SOCA), worked on the investigation for a year before conducting searches and making arrests.

Amphetamine sulphate was found in banana boxes on a lorry that had travelled from England to Annalong, County Down.

Inside the driver’s cab, police uncovered packets of dried noodles that had been used to conceal herbal cannabis.

It is the second crime gang to be sentenced in the past two months. 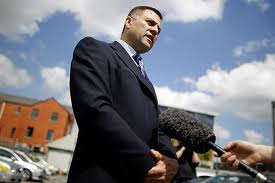 Speaking outside the court, Detective Superintendent Philip Marshall said: “Working with colleagues in partner law enforcement agencies, we have taken millions of pounds worth of drugs off our streets and put the criminals involved in these shipments behind bars.

“We believe we have caught all the members of this organised crime group, ranging from the supplier in Holland and the principal operators, Barry Kavanagh and Liam Young, through to the drivers and couriers.”

He said police were determined to continue to make Northern Ireland a “hostile environment” for those who would seek to make money from supplying drugs.

Matt Burton of the Serious and Organised Crime Agency (SOCA) said: “This organised crime network had no regard for the misery it imposed on its local community.

“They attempted to exploit national and international borders to generate profit.

“This investigation demonstrates that SOCA, with its national and international partners, will tackle the illegal drugs trade by continuing to identify, disrupt and imprison those who facilitate it.”

A Dutch national was sentenced in connection with the 2010 seizure last month.

Another man from Northern Ireland will be sentenced at a later date.