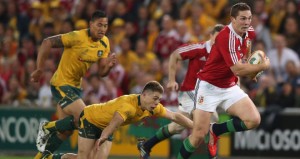 TWO missed penalties in the final minutes by Kurtley Beale gave the British Lions to secure a test victory over Australia.

First, Beale skewed one penalty wide of the post which would have given the Wallabies a slender one point lead.

And as the clocked ticked down to the 80 minutes, Lion’s fans held their breath fearing the game was about to be lost.

But in a dramatic twist at the end of the game, Beale’s left foot slipped from underneath him and his penalty kick fell well short of the posts.

It was a climatic end to a thrilling test in the Suncorp Stadium in front of a packed house.

And the Lions have been boosted ahead of the next test with the news that Ulster’s Tommy Bowe is fit to play, said head coach Warren Gatland at his post-match press conference.

Wales wings George North and Alex Cuthbert both scored memorable tries as the tourists prevailed in a thrilling contest which included plenty of broken-field running.

Israel Folau, scorer of two fine tries, was the star of the show for the Wallabies, who had to deal with a string of costly in-game injuries which afflicted their backs.

Despite the handicap Australia mounted a charge for victory in the closing stages,

Australia’s ranks were depleted within the opening minute as debutant Christian Leali’ifano led with his head while trying to tackle Jonathan Davies and was stretchered off with an apparent neck injury.

The hosts then missed two chances to take the lead as Brian O’Driscoll was pinged twice by referee Chris Pollock for infringements at the breakdown, with James O’Connor missing both kicks.

But Australia went in front in spectacular style when scrum-half Will Genia broke free after taking a tap penalty inside his own 22 before kicking ahead for Folau to collect and score under the posts. 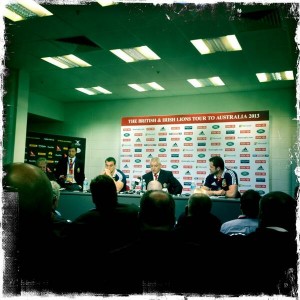 It took the Lions 10 minutes to find a response as a Leigh Halfpenny penalty got them on the board, but the travelling supporters were sent into raptures soon after as North collected a kick deep inside his own territory before bursting through the defence to score in the corner.

Halfpenny added the touchline conversion and, with the touring side having captured all of the momentum, North almost wriggled over in the same corner only for official replays to show he was denied by Folau.

Halfpenny then slotted over another penalty but the Wallabies hit back through second breathtaking try from Folau, with O’Connor’s missed conversion and an off-target penalty from Halfpenny leaving the Lions 13-12 ahead at half-time.

Two more nasty-looking injuries to Berrick Barnes and Pat McCabe meant flanker Michael Hooper had to shift into the Australia back-line after the interval and the makeshift midfield was exposed by Cuthbert, who sauntered through it to score under the posts.

O’Connor quickly responded by finally nailing a three-pointer, and just after the hour mark Beale stepped up to drill over a long-range penalty which reduced the deficit to just two points.

Halfpenny gave the Lions some breathing space with his third penalty, but Beale responded in kind to leave Australia needing just one more successful kick to snatch the win.

But Beale, who had earlier sparked the Wallabies into life with a superb run through the middle, sent a penalty drifting wide of the posts with five minutes remaining before slipping while attempting another as the clock ran down.

The second test is next Saturday, June 29 in Melbourne when the Wallabies will be looking to avenge their defeat.

The final test is on Saturday, July 6.