TWO ARRESTS DURING TOUR OF THE NORTH PARADE IN BELFAST 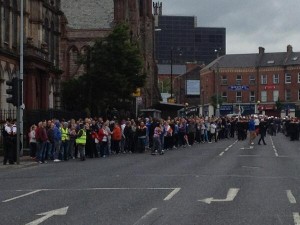 THE controversial Tour of the North parade on Friday evening has passed off largely peacefully, say the PSNI.

Earlier senior Northern Ireland political leaders along with the Chief Constable Matt Baggott had appealed for a peaceful marching station.

Two arrests were made in the Peter’s Hill area.

Police say a small number of youths attempted to run through the bands as they made their way up Peter’s Hill.

There was a heavy police presence in the area and the atmosphere was described as “tense”.

There was a stand-off which lasted for about 15 minutes after police in riot gear sealed off the area to keep rival groups apart.

“However, there were a number of incidents, which are being investigated by police.

“These include suspected breaches of the Parades Commission determination and an attempt by a number of youths to disrupt the procession as it passed Peter’s Hill.

“Officers in the area of Peter’s Hill quickly brought the situation under control and separated the youths from the procession.

“In total, two males were arrested for offences during the duration of the parade.

Anyone with information in relation to either of these incidents is asked to contact detectives at Antrim Road PSNI on 0845 600 800.

Winston Irvine from the Progressive Unionist Party said: “We have seen a peaceful parade attacked by republicans.

“We had a situation where a group of republicans came out and launched an unprovoked sectarian attack against the parade and its participants.

“The people who were attacked showed tremendous restraint as far as I’m concerned and allowed the police to deal with the situation.”

Sinn Fein Culture Minister Caral Ni Chuilin, who was at the scene, said she was disappointed by the breach of the Parades Commission determination.

“This has been described as the first significant parade of the season,” the North Belfast MLA said.

“If that’s the start I would just ask people to reflect on what they’re doing.

“The residents are prepared to speak to anyone, they want to talk to the Orders and they want to get this sorted and I support them in doing that.”

“This evening’s parade proved that the comprehensive template, issued earlier this month, was a genuine effort aimed at resolving the issue concerning St Patrick’s.

“We are saddened that citizens of this city of Belfast were prevented from walking along a main thoroughfare and it makes a mockery of a so-called shared city.

“We are glad the annual event passed off peacefully; we thank our supporters and look forward to celebrating our culture and heritage in a traditional manner.”