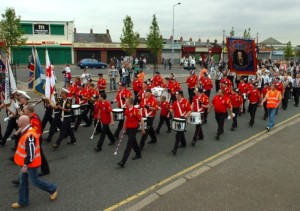 But as hopes are raised of a summer free from trouble across Northern Ireland, tensions are rising along interfaces in north Belfast ahead of Friday night’s Orange Order ‘Tour of the North’ parade.

Late on Wednesday night, the Parades Commission refused a request by unionist politicians to lift restrictions placed on the ‘Tour of the North’ parade.

The Commission has stuck by its original decision that 15 bands taking part in Friday night’s parade are to play only hymn music while they pass St Patrick’s chapel in Donegall Street, Belfast.

And the bands have also been instructed to play a single drumbeat while passing the nearby estate of Carrick Hill.

The two groups wanted to hold separate protests for numbers totalling up to 300.

The Parades Commission has limited the two Carrick Hil protests to 30 people each while a further 30 can protest with the New Lodge group.

As police chiefs keep one eye on the parade and protests, a watchful eye will be closely kept on dissident republicans in the north Belfast area.

On Easter Monday, Oglaigh na hEireann (ONH) left a hoax device along the route taken by an Apprentice Boys parade in the Crumlin Road area.

Dissident republican groups have been using contentious parades in recent years to try and set the two communities at war with each other and to also swell their ranks with young people.

A large police presence will be out in force for Friday night’s parade and a senior PSNI officer said he had no reason to believe the forthcoming marching season will create difficulties.

Assistant Chief Constable (ACC) Alastair Finlay, who is in charge of PSNI Operations, said it was important Northern Ireland’s enhanced global reputation was not spoiled by local tribalism.

Mr Finlay was responsible for the police’s security operations surrounding the G8 summit.

He said continuing dialogue would help the marching season to pass peacefully.

“I don’t think we can predict that we will have a difficult marching season,” Mr Finlay said.

“There has been lots of positivity and and dialogue. The talks have taken place in Cardiff and lots of different groups coming together.

“That dialogue is continuing so there isn’t any reason why we will have a difficult marching season.”