NI TRAINS TO HIT THE BUFFERS AS STAFF GO ON STRIKE 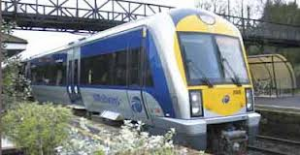 A 24-HOUR strike over pay is to start on Monday by over 150 Translink staff.

Trade union General Municipal Boilers (GMB) confirmed on Thursday that the planned action was going ahead.

It is said the strike was in relation to “an ongoing dispute with the employer over pay and terms and conditions as well as a history of poor industrial relations”.