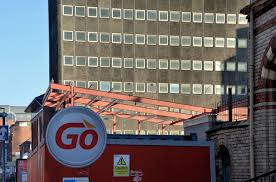 RUSH hour traffic was hit on Wednesday evening following a gas leak at a former hospital in Belfast city centre.

The Fire Service and police rushed to the scene after the alarm was raised around 3.45pm at the old Shaftesbury Hospital in Shaftesbury Square.

A number of nearby properties had to be evacuated during the alert,

Six fire appliances attended the scene and police erected a security cordon in the area and road closures were put in place for public safety.

The alert is now over and all roads in the area have since reopened.

A number of Metro bus services were diverted, but a normal timetable has since resumed.