CHIEF CONSTABLE: I WOULDN’T DO ANYTHING DIFFERENT OVER G8 SECURITY 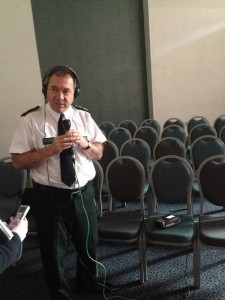 TOP cop Matt Baggott has said that the PSNI was justified in drafting extra police resources for this week’s G8 summit.

The PSNI Chief Constable told BBC Radio Ulster’s Talkback programme that the summit was “the most peaceful and secure” in history.

He was responding following criticism that the security presence rolled out for the summit was excessive.

A total of 4,700 PSNI officers were on duty along with along with 3,600 from other UK forces during the summit operation which cost the public purse around £60m.

Mr Baggott thanked his officers and the public for their assistance during the two-day event.

He said many protesters did not arrive in their expected thousands as the PSNI had a reputation for dealing with public disorder.

Mr Baggott also said the summit, which was held at the Lough Erne Hotel and Golf Resort for eight of the world’s most powerful leaders on Monday and Tuesday, took place during a “severe terrorist threat” from dissident republican groups.

Only two arrests were made by protestors – one in Belfast and the other in Enniskillen.

The Chief Constable told Talkback presenter Wendy Austin: “The security investment has proven itself to be more than worthwhile.

“We made planning assumptions based on previous G8s.

“I wouldn’t do anything differently if we started again.

“There were people that wanted to come here and violently protest. The fact that they didn’t has been due to the policing.”

Early police estimates of the number of protesters expected in Belfast and near the summit venue in County Fermanagh turned out to be inaccurate.

They had predicted tens of thousands could turn up, but, only a few thousand people are estimated to have taken part in protests in Belfast and Enniskillen before and during the summit.

The officers from the other UK forces have now returned to their own regions.

“There has been some ill-informed and narrow-minded criticism comparing the level of the security arrangements with the low levels of protest,” Mr Ford said.

“Had we not prepared properly and trouble ensued, the reputational damage to Northern Ireland would have been many times the policing cost.

“Compared to previous G8 meetings we had incredibly positive images being broadcast around the world and this can only enhance our international standing.”