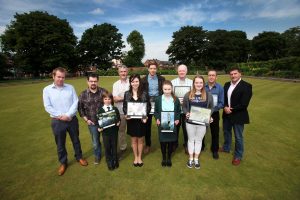 IT has been another fantastic year in the annual Belfast Parks Photographic Competition.

And the judges for Belfast City Council said that the standard of entries just keeps on climbing.

The winners in the 2013 awards were presented with their prizes at the awards ceremony in Ormeau Park`s bowling pavilion.

They shared the £1,000 prize sponsored by John McQuillan (Contracts) Ltd and were presented with their cheques from the Deputy Chairman of Parks and Leisure Committee, Councillor Caoimhín Mac Giolla Mhín.

Congratulating all the winners Councillor Mac Giolla Mhín said: “Each of you has shown an exceptional eye in the photos you submitted.

“The judges said they had a really tough job particularly when choosing between the award winners.

“I think the photos will make us think again as we walk around the various parks. You have done a great job and deserve the awards received here today.”

More than 350 photos were entered in the competition – the highest number of entries to date – and a selection of these, as well as the award winning shots, will be on display during Rose Week in July.

A mystical shot of ducks on the lake at Victoria Park won Bruce Marshall, from east Belfast, first prize in the` Wildlife in our Parks` section. Second prize in this section went to Melissa Dupont, and third place went to Peter Hewitt, both of them from Belfast.

The `People in Parks` section was won, with a black and white shot of boys playing football in Botanic Gardens, by north Belfast resident Chris Copeland. Second place went to Moira man, Peter Soult, while Lucy Jenkins took third place with a photo of children playing on a park sculpture.

Under-16s winner, Fay Wallace, from Newtownards, presented a picture of wooden sculpture in Belmont Park that was almost lifelike. Second place went to Alice Soult from Moira, who is following in her father`s footsteps with her interest in photography, and Ross Dickson from Belfast completed the trio with his nature shot.