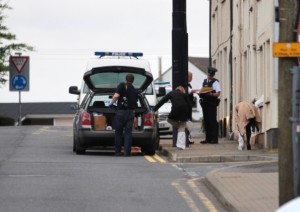 DETECTIVES from the PSNI’s Rape Crime Unit are investigating a serious sexual assault at the weekend.

And it is the second horrific rape of a female in the town of Magherafelt this month.

The latest rape incident happened in the early hours of Sunday morning near the town’s police station at Meeting Street.

A 17-year-old girl told detectives that she was seriously sexually assaulted n premises in the street.

Detectives, crime scene investigators along with photography branch attended the scene in a follow-up search for clues to the rapist.

Anyone with information about the rape is asked to contact detectives at the Rape Crime Unit based in Ballymoney PSNI station on 02827 649 614 or Crimestoppers in confidence on 0800 555 111.

On Saturday, June 1, detectives were called out to Magherafelt following a serious sexual assault which happened between midnight and 2.30 am.

Police appealed for anyone who was in the Leckagh Drive and Meadowbank Road area at the time to contact them.