G8 SUMMIT: NO DEAL OVER ASSAD BUT LEADERS PLEDGE US 1.5 BILLION IN AID TO SYRIA

IT is enough to jolt anyone into action – an early morning swim in the cold waters of a Lough Erne lake.

But David Cameron’s swim to stir him into action wasn’t enough to get full agreement on Syria’s leader President Bashar al Assad.

Leaders at the G8 summit agreed a statement on Syria.

However, it stopped short of a demand for then removal of President Assad’s regime.

Russian president Vladimir Putin, a key ally of Assad, refused to go along with any document that called for the Syrian leader’s removal.

Prime Minister David Cameron said it was “unthinkable” that the longstanding leader could play a part in Syria’s future.

But a seven-point plan he unveiled during a news conference following the two-day summit in Northern Ireland made no reference to Mr Assad.

It came after Russia’s Deputy Foreign Minister had earlier said that his country would not sign up to any statement that demanded Syria’s president be replaced with a transitional government.

Mr Cameron admitted it was “no secret that there were very different views around the G8 table”.

“But we all share a vital interest in bringing this conflict to an end and helping the Syrian people to achieve the change they want so we agreed to work together on seven things”.

He told a press conference at the Lough Erne Hotel and Golf Resort that his guests had enjoyed their stay in Northern Ireland. 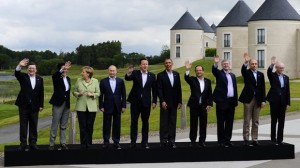 “Hosting a G8 summit in Fermanagh 25 years ago would have been unthinkable,” he told the press conference.

In a high-stakes discussion over dinner on Monday night, Mr Putin agreed to sign up to detailed language about the future governance arrangements for Syria.

But the Russian president refused to endorse any statement that the G8 saw no place for Assad in it.

The chief communique states that the G8 nations – the UK, US, France, Germany, Italy, Canada, Japan and Russia – are “committed to achieving a political solution to the crisis based on a vision for a united, inclusive and democratic Syria”.

It endorses plans to restart peace talks in Geneva “as soon as possible” and says that they should begin with both sides agreeing on “a transitional governing body with full executive powers, formed by mutual consent”.

Crucially, the document says that Syria’s public services must be “preserved or restored” under future arrangements, adding: “This includes the military forces and security services”.

It adds: “However, all governmental institutions and state offices must perform according to professional and human rights standards, operating under a top leadership that inspires public confidence, under the control of the transitional governing body.”

The G8 leaders also confirmed that they are making almost 1.5 billion US dollars available in additional funding for humanitarian operations in Syria and its neighbouring countries.

They said they were “deeply concerned by the growing threat from terrorism and extremism in Syria” and by the increasingly sectarian nature of the conflict.

They called on both the regime and Opposition forces to “destroy and expel from Syria all organisations and individuals affiliated to al Qaida and any other non state actors linked to terrorism”.

The communique condemned any use of chemical weapons in Syria, but was silent on US and UK claims that evidence shows Assad has already used nerve gas Sarin on his own people, something which Moscow has disputed.