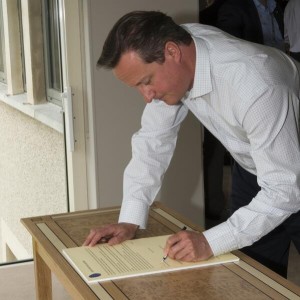 THE world leaders attending at the Lough Erne G8 summit have signed an agreement on tax evasion, trade laws, transparency and the movement of goods across borders.

However, no overall agreement has been reached over the political, military and humanitarian crisis gripping Syria.

It is believed Russian president Vladimir Putin refused to co-sign any document relating that President Assad of Syria should be replaced.

Prime Minister David Cameron has been hosting the talks at the Lough Erne Hotel and Golf Resort in Co Fermanagh.

The eight world leaders are due to break up at 3pm and head back to their respective countries on planes waiting at Belfast International Airport and RAF Aldergrove.

Here is the Lough Erne Declaration in full:

1. Tax authorities across the world should automatically share information to fight the scourge of tax evasion.

2. Countries should change rules that let companies shift their profits across borders to avoid taxes, and multinationals should report to tax authorities what tax they pay where.

3. Companies should know who really owns them and tax collectors and law enforcers should be able to obtain this information easily.

4. Developing countries should have the information and capacity to collect the taxes owed them – and other countries have a duty to help them.

5. Extractive companies should report payments to all governments – and governments should publish income from such companies.

6. Minerals should be sourced legitimately, not plundered from conflict zones.

7. Land transactions should be transparent, respecting the property rights of local communities.

8. Governments should roll back protectionism and agree new trade deals that boost jobs and growth worldwide.

9. Governments should cut wasteful bureaucracy at borders and make it easier and quicker to move goods between developing countries.

10. Governments should publish information on laws, budgets, spending, national statistics, elections and government contracts in a way that is easy to read and re-use, so that citizens can hold them to account.