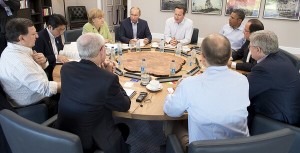 THE G8 world leaders meet have got down to business on Tuesday morning for a second day of talks in Co Fermanagh.

Prime Minister David Cameron is hosting the event at the Lough Erne Hotel and Golf Resort.

The main focus for the leaders today is dealing with extremists around the world.

Mr Cameron will use the morning session to urge fellow leaders not to pay ransoms in an international attempt to cut off funding to terrorists.

In the last three years around £45m has been paid to secure the release of Western captives, which works out at almost £1.6m per victim.

It is believed much of that cash has ended up in the hands of terror groups including al Qaida and the Taliban.

Although the UK outlaws these payments, other countries continue to meet the demands.

Mr Cameron, however, is not expecting that others will make ransom payouts illegal, but hopes to secure a “tangible agreement” to frustrate the lucrative practice.

Earlier this month, the Prime Minister said: “I want a declaration. I want countries to sign up to a tangible agreement.”

It was put on the table after 135 oil workers – including one man from Belfast – were kidnapped by Islamist militants in Algeria in January.

Speaking at the G8 destination on Monday, Mr Cameron said the summit would concentrate on three areas which would be of benefit to “hard working families around the world”.

“So right across the world countries get the tax revenue they need to keep taxes down for hard working people, and to make sure we can have good health and education systems for all our people,” he added.

Leaders of eight of the world’s most influential countries arrived in Northern Ireland ahead of the talks which began on Monday.

Later that night they held a working dinner while they discussed foreign affairs, including issues surrounding Syria and Libya.