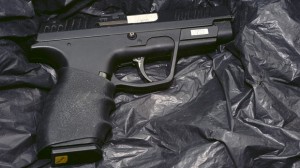 POLICE have released a picture of this gun which was used by dissident republicans in a paramilitary attack in west Belfast three years ago.

The image was issued after a man was sentenced over the shooting on Monday.

Tiernan Porter received six years in jail at Belfast Crown Court after pleading guilty to a number of charges relating to the gun attack on Monday 31 May 2010.

The 22-year-old, from Glasvey Walk in Dunmurry, was sentenced to three years in custody followed by three years on license.

In the attack, a 26-year-old man was shot in the left thigh in a flat in the Juniper Park area of Twinbrook and required medical treatment at the Royal Victoria Hospital, Belfast.

A 28-year-old woman was also in the property at the time and was uninjured.

Porter had previously pleaded guilty to the wounding with intent of a man on May 31, 2010 and possession of a firearm with criminal intent on that same day.

He also pleaded guilty to possession of a firearm in suspicious circumstances and possession of articles for a terrorist purpose between 19 January and 11 November 2010.

The PSNI said after he was sentence: “These types of attacks are not a form of justice.

“They are a cruel and illegal practice and those responsible can rest assured we will continue to play our part in reducing the number of these attacks and bringing perpetrators before the courts.

“Paramilitary attacks are a scourge on our local community and today’s sentencing demonstrates that the PSNI and our partners within the criminal justice system are committed to bringing those responsible for such attacks to justice.

“Last year, the PSNI outlined plans to tackle this issue as part of a new policing approach, stating a renewed determination to help communities take these attacks and attackers off their streets and reduce the harm cause,” the statement continued.

“The initiative included a full review of all investigative leads, a co-ordinated approach with Crime Operations and District policing to disrupt the activities of those believed to be involved in this criminality and a renewed appeal for public assistance through the social media platform, Facebook.

“The PSNI will continue to play its part in addressing this issue both in prevention and detection and dealing with the issues that can cause this form of attacks to occur.”


2 Responses to REVEALED: THE LETHAL WEAPON USED IN PARAMILITARY SHOOTING