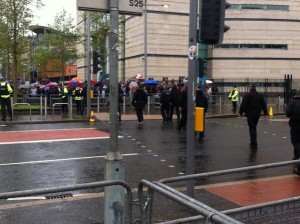 POLICE have arrested a man following a protest in Belfast city centre.

The 19-year-old was detained outside Belfast City Hall for a number of offences including disorderly behaviour.

He was one of a small group of demonstrators making their way from the Falls Road to Belfast City Hall.

The teen was arrested at 11am on Monday, before protestors made their way back to west Belfast.


One Response to G8 SUMMIT: MAN ARRESTED IN BELFAST