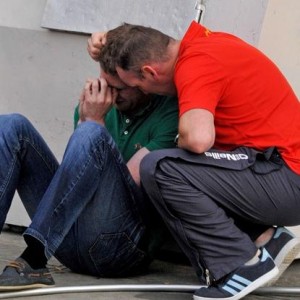 POLICE in New York are hunting two drivers after a Co Do man was the victim of a hit-and-run.

Officers in the Bronx say Newry man Kevin Bell may have been struck by two vehicles near a bar on Sunday morning.

A search is now underway for the drivers of the two vehicles following the hit-and-run just off East 233rd Street.

Kevin Bell was a local soccer player and was due to play a game on Sunday but it was cancelled as a mark of respect.

Local resident Rick McManamy, 56, woke up to flashing lights after the accident happened in front of his home.

He said a woman driving westbound saw the young man lying in the middle of the road before he was hit.

She stopped her vehicled and rushed over to try to help him, but he got hit by a car before she got there, McManamy said.

“She saw him get down on the ground, and said, ‘Wow, I should help that guy out of the street.’ By the time she pulled over and got down the hill, he’d already been hit, said McManamy, who spoke to the good Samaritan. “She saw blood coming out his head.

“She felt terrible. She said, ‘If only I pulled over immediately, I could’ve saved him,” McManamy said.

Mr McManamy said he didn’t hear brakes and wondered if the driver knew he hit someone.

“It’s dark over there,” he said. “It’s possible that the [driver] didn’t see him. But imagine the [victim’s] parents. They probably live in Ireland, all the way in another country, and they get this news? It’s terrible.”