MASSIVE SECURITY OPERATION READY TO ROLL OUT FOR G8 SUMMIT THE security forces are putting the final touches to the largest security operation ever mounted in Northern Ireland.

Around 8,500 police officers from the PSNI and forces in England will receive the most up to date briefings on security and intelligence ahead of Monday’s summit in Co Fermanagh.

Belfast city centre is expected to come to a standstill on Monday morning as US President Barack Obama makes a speech to students at the Waterfront Hall.

On Sunday outside the Waterfront Hall,, anti-G8 protestors dressed in Orange boiler suits calling for the closure of the Guantanamo Bay detention centre whichs has been used to hold Al Qa’eda suspects without trial.

He will arrive at Belfast International Airport on board his Air Force One jumbo plane.

The President will transfer to his heavily armour plated Marine One helicopter which will whisk him to the George Best Belfast City Airport.

He will then travel in a massive cavalacade of armoured limousine cars along the Sydenham by-pass in east Belfast to the Waterfront Hall in Oxford Street amid a massive ring of steel.

The exclusion zone around the G8 summit venue in the Lough Erne Hotel and Golf Club has now extended to the water on Sunday lunchtime.

As part of the necklace of security being mounted in Co Fermanagh to protect the world’s most powerful leaders, boats will be prevented from entering a six-mile stretch of lower Lough Erne.

Ribs, speedboats and a tug boat repainted with blue and yellow police livery are being used to secure the approaches to the summit venue by water. 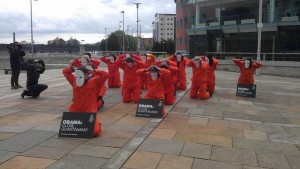 Anti-G8 protestors outside the Waterfront Hall on Sunday

Some of the world’s most powerful leaders will be attending the summit on Monday and Tuesday.

The PSNI have been joined by several boats and crews from across the UK.

The restrictions will be enforced from lunchtime on Sunday until the G8 leaders leave on Tuesday night.

Boats will be prevented from entering lower Lough Erne from Enniskillen at Portora lock, with the exclusion zone extending north of the summit venue to an area adjacent to Ross Point.

As well as pop-up accommodation on the shore, some cruiser companies have hired out their boats to provide accommodation for crews based at Lough Erne Yacht Club.

The Canadian Prime Minister, Stephen Harper, has arrived in Ireland ahead of the summit and is due to meet the Irish Prime Minister Enda Kenny later on Sunday. The Archbishop of York, Dr John Sentamu, is hosting a church service as part of the IF campaign to end world hunger, in St Macartin’s Cathedral in Enniskillen on Sunday afternoon.

It follows the Big IF concert in Belfast’s Botanic Gardens on Saturday evening, which was staged to send a message to world leaders on the issue.

The concert was organised by a number of charities including Oxfam, Trocaire and Christian Aid and featured high-profile speakers and video messages from celebrities.

Meanwhile, in Enniskillen free classical music concerts were organised in advance of the G8 summit.

Earlier on Saturday, there was a major security presence for an anti-G8 protest in Belfast which was attended by 1,500 people.

The rally was organised by the Irish Congress of Trade Unions (ICTU), ahead of the G8 summit.

The ICTU said one billion people were living in “extreme poverty” around the world, due to Western capitalism and the policies of the G8 leaders.

The rally passed off peacefully and no arrests were made. The Police Service of Northern Ireland said protesters started to disperse at 14:00 BST.

Hundreds of police officers and scores of PSNI vehicles lined the route of the march to Belfast City Hall, and police helicopters circled overhead.

On Sunday afternoon, the Ulster Championship gaelic football match between Fermanagh and Cavan is due to take place at Brewster Park in Enniskillen.

Police have asked motorists to leave extra time for their journey.