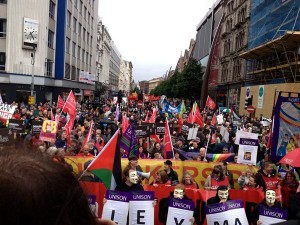 Around 1,500 gather at anti G8 rally at Belfast City Hall on Saturday

THE first major anti-G8 protest has started in Belfast on Saturday ahead of the arrival of some of the world’s most powerful leaders.

Around 1,500 have gathered in Belfast city centre for the ‘Big March for a Fairer World’ demonstration on Saturday, say the PSNI.

It is much less than the 5,000 which organisers had been expecting.

There is a heavy police presence in the city centre with a large number of Tactical Support Group officers and landrovers keeping watch on the rally.

Union flag protesting oyalists who had also gathered at the City Hall started to jeer as the anti-GB speeches got underway.

Some shouted: “Our only crime was loyalty.”

And loyalists claim that the PSNI have told them to “move on or be arrested”.

ICTU chair Pamela Dooley told the crowd: “Today is a defining moment in our history.”

The PSNI have advised motorists of possible delays in the south and east of the city throughout the day.

Crowds started to gather at midday in Custom House Square before marching through the streets to an event at City Hall for 1pm. 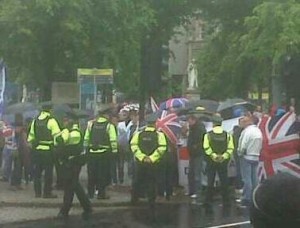 It’s organised by the Northern Ireland Committee of the Irish Congress of Trade Unions, campaigning groups such as Amnesty International, Friends of the Earth, the IPSC and anti-fracking campaigners.

In a statement ahead of the event, organisers said: “Civil society organisations have come together to offer people an opportunity to challenge the policies and priorities of the G8 leaders.

“Our organisations represent many different interests but we are united in a commitment to the creation of a world that is fair and just for all.

“We believe that achieving social, economic and environmental justice must be central to political decision-making.”

Meanwhile, thousands are expected to attend the Big If event in Botanic Gardens from 2pm.

They will come together for a programme of live entertainment and demand action on world hunger to show their support for the ‘Enough Food for Everyone’ IF campaign.

Bangor band Two Door Cinema Club will be performing at the event among other headline acts such as the Ulster Orchestra, Flash Harry, SOAK, David C. Clements and the Belfast Community Gospel Choir.

It will also feature speakers from Tanzania, Uganda, Kenya, India and Zambia will share their stories and Oscar-winning actor Jim Broadbent will recite a Seamus Heaney poem.

The IF campaign is a coalition of 200 charities, aid agencies and trade union groups.

The event has sold out and only ticket holders will be able to access the grounds on the day for the concert and family fun day.

David Thomas, chairman of the IF campaign in Northern Ireland, said: “We want to make sure the world leaders hear our call for urgent action to tackle the underlying causes of hunger.

“Tax dodging by big companies and land grabs where land is used for fuel and not food also need to be addressed. Now is the time for concrete action, not just words.”


One Response to ANTI-G8 SUMMIT PROTEST IN BELFAST GETS UNDERWAY