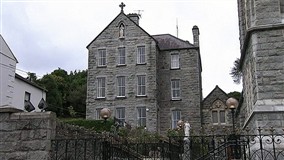 FIVE members of a Catholic Priory have been left badly shaken after they were targeted in an armed robbery.

The Dominican Fathers were held at gunpoint at St Catherine’s Dominican Priory at around 8.30pm on Thursday evening.

Two men, who spoke with Republic of Ireland accents, threatened them before escaping with a sum of money.

No one was injured, but the men were left badly shaken by the robbery.

One is described as in his mid 30s, 6’1″ tall and with a short grey beard. The second man was of heavy build, had bad skin and was wearing a dark hooded top.

Members of the church community say it is not the first time has been targeted.

SDLP MLA for Newry and Armagh, Dominic Bradley described the incident as a “despicable act.”

“The robbery of a community who live by a vow of poverty and depend on donations from its congregation – those who carried it out have shown no respect for the whatsoever for the Church or its people.

“When news about the incident went out last night, people gathered here on the steps of the church and remained there for around two hours and then joined the priests afterwards.

“I was speaking to the Prior this morning, and he was appreciative of the support that the local people showed for the Dominican community here in Newry.”

Anyone with information about the robbery is asked to contact police at Ardmore station in Newry on 0845 600 8000.


One Response to SDLP CONDEMN GUN-POINT ROBBERY OF NEWRY PRIORY