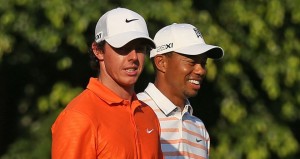 INTO THE LION’S DEN: McIlroy faces Tiger Woods in US Open

RORY MCILROY goes head to head with Tiger Woods for the first time in a major championship at next week’s US Open.

The pair have been grouped with Masters champion Adam Scott as the world’s top three players were put together for the opening two rounds at Merion.

The decision means Woods and Sergio Garcia will be kept apart for the first two days at least following their highly-publicised series of spats last month.

Garcia offered an unreserved apology to the world No 1 for “stupid and out of place” comments at the European Tour’s annual awards ceremony at Wentworth ahead of the BMW PGA Championship.

Asked if he would invite Woods to dinner at Merion to settle their bust-up at Sawgrass, Garcia replied “We will have him round every night. We will serve fried chicken.”

Garcia said he had been asked to wait until Merion to apologise in person to Woods, who said last week: “It’s already done with. It’s time to move on.”

Garcia will tee off along with former Open champions Padraig Harrington and Stewart Cink at 7:44am local time from the 11th hole in the first round, with Woods, McIlroy and Scott starting at 1:14pm from the first.

Defending champion Webb Simpson gets under way at 1:36pm alongside Open champion Ernie Els and 2012 US Amateur champion Steven Fox.

the Lyoness Open in Austria and FedEx St Jude Classic in Memphis, with the world top 60 securing their places at Merion.