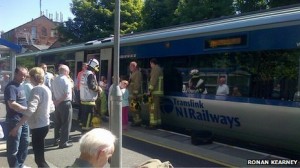 ANOTHER train has had to be halted after a fire.

A fire on board a train at Dunmurry earlier is the second on an NIR train in a matter of hours.

A Fire and Rescue Services spokeswoman said what “appeared to be a small fire in a carriage,” was reported shortly before 11am on Friday.

An investigation is already under way after a fire broke out on a train outside Newry last night on the Belfast-Dublin line – stranding passengers for hours.

Translink said passengers were evacuated and emergency procedures were put in place today during the latest alert.

Smoke was detected on the Portadown to Belfast train outside Dunmurry on Friday, said a spokesman.

“There are no reports of any injuries and an investigation is underway,” Translink said.

“Passengers have been transferred to another train to complete their journey.”

Translink said the disruption caused by the incident had now ended and services were no longer affected by the problem.