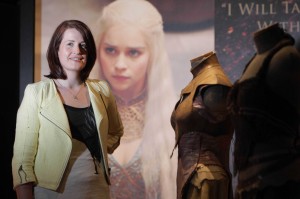 FIRST Minister Peter Robinson has officially launched the HBO Game of Thrones Exhibition which opens to the public at Titanic Belfast on Saturday, June 8.

At a reception at Crumlin Road Gaol, the First Minister joined leading cast members of HBO’s award-winning series, as part of a tourism event organised by the Northern Ireland Tourist Board (NITB) in partnership with NI Screen.

Speaking at the event the First Minister said: “The Northern Ireland Executive is committed to growing a dynamic, innovative economy.

“The film and television industries are vitally important to Northern Ireland and, through continued investment in our creative industries, we will continue to build on our reputation across the world as an excellent location to invest.

“I met with senior HBO executives at the Season 3 premiere in Los Angeles in March and took the opportunity to continue to press Northern Ireland’s advantage as a first-class production location.

“I am pleased that HBO will be returning to Northern Ireland in July to film a fourth series.

“This world class exhibition provides us with a unique opportunity to welcome tourists to Northern Ireland from as far away as Australia, the Philippines and the US, and to demonstrate globally our connection to Game of Thrones. 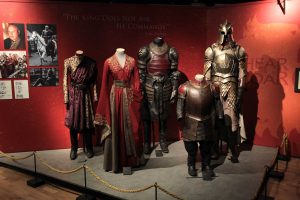 “It is a great tribute to Belfast that it is one of only five destinations across the world chosen to host this unique tourist attraction.”

Northern Ireland Tourist Board Chief Executive Alan Clarke said: “Game of Thrones has put the Northern Ireland film industry on a global stage and we are delighted the exhibition is being hosted in Belfast with thousands of fans coming from across the world to see it.

“Northern Ireland is growing increasingly popular for filming not only for the diverse beauty of its landscapes but the talent both in front of, and behind, the camera which in turn has generated millions for our local economy,” he continued.

“Screen tourism is a growing trend and recent research suggests that one in ten overseas visitors are attracted to the UK because of a film or television production and they contribute a massive £1.8billion per year.

“Game of Thrones and other film productions made in Northern Ireland offers us an opportunity to develop exciting and engaging tourism experiences and we are working with the hospitality trade, NI Screen and the wider tourism industry to build on our film and TV tourism offer,” he added.

The event celebrated the success of the show for the Northern Ireland screen tourism industry and provided an opportunity to preview the exhibition. Around 13,500 tickets for the exhibition at Titanic Belfast have already been booked and Belfast is the only city in the UK to host it.